In October 2011, Sacred Sites Research (SSR) completed a project, under contract to the Bureau of Land Management (BLM), to make traced replicas of 22 petroglyph panels inside the fenced areas, and an additional 30 petroglyph panels outside fenced areas at the Castle Gardens Rock Art site, Wyoming. The principal investigator for SSR was Lawrence Loendorf but the main field work and laboratory work was completed by Laurie White and Greg White. Karina Bryan was the authorized representative for the BLM. The tracing effort was recommended by Johannes Loubser, (2009) in a condition assessment project he completed for the Lander BLM.

The Castle Gardens site was first reported in the late 1920’s by David Love, who lived on a nearby ranch. Love’s study of the site, nestled in a sandstone outcrop with chimerical shapes reminiscent of turrets and towers, led him to name it Castle Gardens (Figure one). David Love would continue his life to become one of North America’s foremost geologists. Fortunately he recognized the significance of Castle Gardens and wrote letters to regional archaeologists asking that they visit the site. One of these letters was successful in attracting University of Denver archaeologist Etienne Renaud to the site in July of 1931.

Figure 1. The Castle Gardens site. The white color of the Mesa Verde sandstone stands out in direct contrast to the surrounding countryside.
Gregory White photograph.

Renaud, educated in France where rock art was an integral part of his studies, was so impressed with Castle Gardens that he returned to make notes and drawings of the intricate incised figures that were painted in as many as four distinct colors (Figure 2). Researchers continued to photograph and complete drawings at the Castle Gardens site (see Francis and Loendorf 2002 for an overview). Sower's (1941) photographs of the site are available at the American Heritage Center in Laramie, Wyoming and a report by David Gebhard and his colleagues (1987) is available from the Lander BLM. 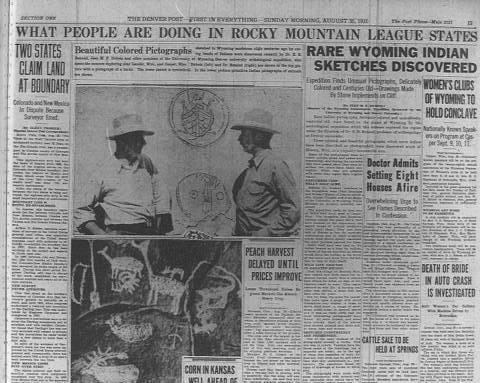 In the Sacred Sites Research at the site, we tried to include many of these early drawings and illustrations in the final report. The comparative records of the site are useful to learn the changes to various panels through time. In some cases, Sacred Sites Research personnel found images that were not discovered in the earlier projects, but in many more cases we learned that portions of panels had eroded from view or we found that entire panels were missing or stolen from the site.

In this short review of the project, we present examples of some of the shields that were traced by Sacred Sites Research. In future articles, we may offer examples of other figures at the site. Qualified researchers can obtain a more complete report from the Bureau of Land Management in Lander, Wyoming (Loendorf, White and White 2012).

Castle Gardens is best known for the shield figures that dominate many of the panels at the site. Using D-Stretch and other photographic enhancement techniques, it was possible to find remnants of paint in many of the shields. These colors were added to the traced replicas (Figure three and four). 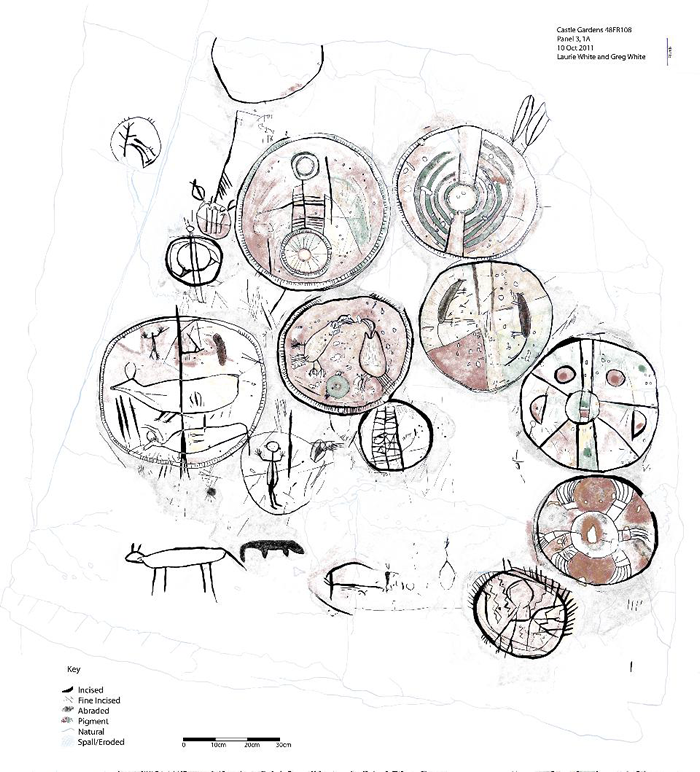 Figure 3. Traced replica of Panel 3 at the Castle Gardens site. The shields were made by abrading the sandstone surface until a circular area was totally smooth and in some cases this area was ground into the sandstone as much as a centimeter. The outline and interior parts of the design were then incised into the smoothed area. Paints in three or four colors, including green, were added to the shield. 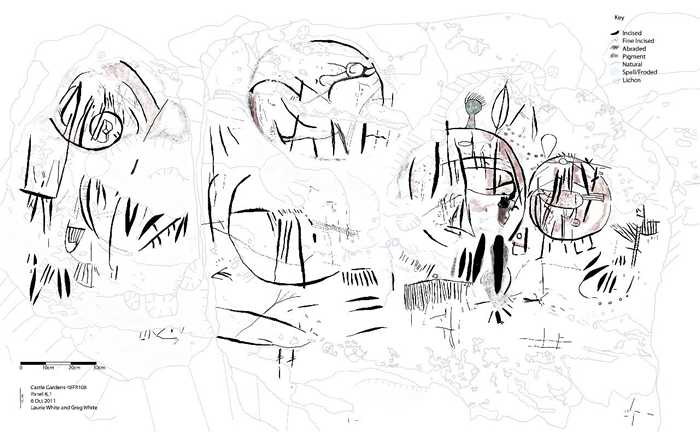 Figure 4. Traced replica of Panel 8.1 at the Castle Gardens site. The figures are dominated by shields and shield warriors. Importantly, there is a good example of a shield-bearing warrior with a green head protruding above the shield. The majority of the shields at Castle Gardens are free-standing, independent of the warrior part of the motif. The shield to the upper right of the tracing has a quadruped on it with a long flowing tail. We believe it may represent a horse.

Some of the panels are large so reproducing them on a web page makes it difficult to see individual figures. However, an advantage to the tracing, however, is that the one to one scale offers good clarity when extracting an image from the panel. For example, the shield with the possible horse is difficult to see in the overall drawing but when it is enlarged, it is much easier to study the image. 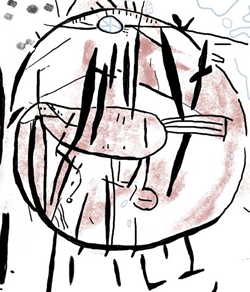 Figure 5. Shield that is decorated with a possible horse from Panel 8.1.

Another important shield at Castle Gardens is the figure that is sometimes referred to as “zigzag man” because the human figure has zigzag or “power” lines connecting it to the shield. (Figure six) The figure is also known for the two spears it holds, one in each hand. Using D-Stretch technology, Laurie White was able to find three to four distinct shades of hues of colors in the figure. The green paint was studied with a portable x-ray fluorescence instrument through which we learned it is probably from a mineral known as fuchsite or green mica (Newman and Loendorf 2005). 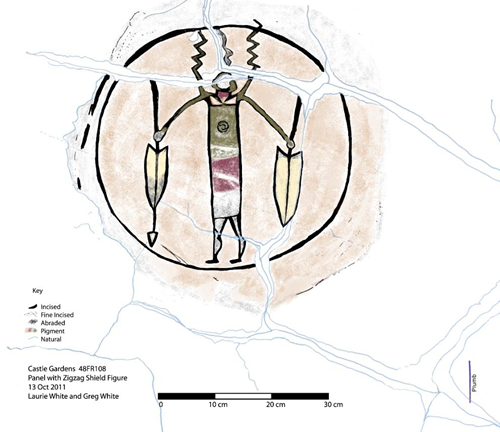 Figure 6. Zigzag man at the Castle Gardens site. The multi-colored figure is a good example of a Caste Gardens style shield.

Another interesting detail of the “bear coming out” motif was found on a shield in Panel 15 (Figure seven). Jim Keyser (2004) previously noted the “bear coming out” figure at the Castle Gardens site, but in the tracing we were able to study the color remaining in the figure. The Castle Gardens figure represents two bears emerging from a central den. A similar example of two bears emerging from a den is found at the Valley of the shields site in Montana.

We noted that at both Castle Gardens and Valley of the Shields, the bear was emerging from a green-colored den and the bears have green eyes at both sites (Figure eight). This discovery serves to demonstrate the contemporary nature of the two sites. With Valley of the Shields dated at about A.D. 1550, we can assume that Panel 15 at Castle Gardens is likely about the same age.

“Bear coming out” is also known as a Crow and Kiowa shield design which suggests it may represent one of these groups at Castle Gardens and Valley of the Shields (Figure nine). Unfortunately there is simply not enough evidence to make that assumption. We need to find more examples of the motif.

Figure 7. “Bear coming out” motif on a shield at Castle Gardens. The photograph on the left has been enhanced to bring out the color that is then displayed in the tracing on the right. Note the green hole or den from which the two bears are emerging. The left bear has one green and one red eye and green ears. 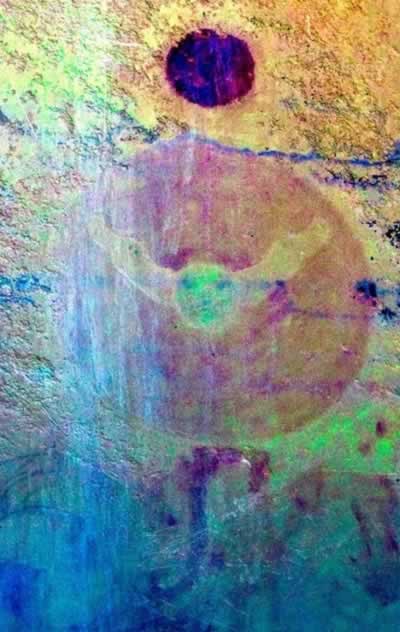 Figure 8. Enhanced photograph of a shield-bearing warrior at the Valley of the shields site, Montana. Note the two bears emerging from a central hole or \den. The den is green-colored and the eyes of the bears are also green.

Figure 9. The “bear coming out” motif on a Crow shield on the left and a Kiowa shield on the right. The motif is found on four known Crow shields. The Kiowa example was made for James Mooney.

Sacred Sites Research personnel consider the Castle Gardens tracing project to have been a success. We believe that the traced images will serve as an excellent record of the site’s ancient rock art and they will also be useful to the Bureau of Land Management as they move forward with interpretive efforts at the site.