First and foremost, Sacred Sites Research recognizes rock art sites as archaeological sites. Of course they are also places where people left images on rocks and where the rock-art-making activities were embedded in cultural patterns that often become apparent by an analysis of the artifacts and features found at the site. Sometimes the associated artifacts and features are found through excavation, but in most instances they are recovered from site surfaces.

We have learned that it is as instructive to analyze the chipped-stone debitage and ceramics at a rock art site as it is to examine the same material at a site where rock art is not present. Artifacts such as chipped stone from the Alibates quarry in Texas or the Knife River Flint quarries in North Dakota are telling us the same thing, whether they are found at a rock art site or on a lithic scatter site: that the individuals who left them were engaged in the same interaction spheres.

Distributional analysis is one methodology we use to understand rock art motifs. SSR uses four main approaches to study rock art distributions. First, we work with the rock art panel where we complete a basic distributional study of images. In this effort we look at the relationship between two or more figures to identify patterns that create an intentional composition or scene, or more general symbolic association.

On a second level, rock art is examined as it is related to other archaeological components at a site. In many cases, the other components are additional rock art panels in, around, or adjacent to the primary site. Or there are also many examples of rock art figures located in relationship to architecture or other archaeological features, such as storage granaries or habitation shelters. This intra-site level of study can be useful in elucidating ritual, activity or specialized task areas within a site.

Examining rock art sites in relationship to other regional rock art sites is a third important scale of analysis. It is usually at this inter-site level of study that it is possible to identify the distribution of images that are common across a region and establish types or styles of rock art. It is also at this regional level that rock art style boundaries are identified. The results of this research can offer inferences about former social or political units, trade routes or ceremonial sites.

Finally, the fourth analysis of rock art is in relation to landscape. The scale of landscape studies can again vary from site to site. This analysis looks at (1) relationships between motifs and natural rock features (2) examines the view shed of a rock art site; and (3) plots on the regional level the locations of the rock art sites within their geographic and geomorphological contexts.

As with many heuristic schemes, these approaches are not always mutually exclusive. For example, rock art figures are frequently connected, through pecked lines or simply by an attribute of the figure, to cracks or holes in the rock surface. In this regard they are interrelated with the environment or the substrate and might logically be included in a landscape approach to studying rock art, yet also might be included in an intra-regional scale study as well.

SSR also employs extensive use of ethnographic sources in the understanding of rock art sites. By the term ethnography, we mean more than written records. Items preserved by, actively used by, or depicted by traditional sources, such as apparel that has changed very little through time, may also be represented in rock art. Many painted artifacts, such as robes, tipi covers, and ledger drawings, as well as early photographs, often contain clues to the contexts in which items depicted in rock art panels may have been used.

Another important area for research utilizes neuropsychological models. In their landmark article, David Lewis-Williams and Thomas Dowson note that the human neuropsychological model (N-P) generates a range of luminous percepts that are independent of light from an external source. These visual phenomena generally take geometric forms such as grids, zigzags, dots, and spirals, and are experienced as shimmering, moving, rotating, and sometimes enlarging patterns which grade into one another and combine in bewildering arrays. This imagery can be induced by many means including fatigue, sensory deprivation, intense concentration, auditory driving, migraine, schizophrenia, hyperventilation, and rhythmic movement. Researchers have linked these images to petroglyphs and pictographs. 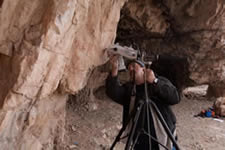 A Bruker Tracer III-V portable x-ray fluorescence instrument is shown in use analyzing the pigment in a painting at Picture Cave, Texas. In this case, Chris Loendorf was able to differentiate two batches of red paint and suggest relationships between figures across the site.

Dating and Other Studies

A large number of experimental methods for dating rock art have been proposed in the past quarter century. Some have met with considerable skepticism and ultimate failure while others have successfully advanced rock art research. SSR personnel have been closely involved in this research. Dating of paint has been one of the more successful methods. The plasma oxidation approach developed by Marvin Rowe and his colleagues has been tested around the world with considerable success.

Other analytical tools are also used to study rock art. Portable x-ray fluorescence, for example, has been successfully used to analyze the make-up of pigments used in rock painting.