With the passage of American Indian Religious Freedom Act (US Public Law 95-341, 42 U.S.C. 1996 and 1996a) and parts of other federal codes, archaeologists are now obligated to consider the beliefs and opinions of American Indians regarding those sites. This federal legislation has had the effect of stimulating two significant incentives to advance rock art research. First, it has required field archaeologists to learn how to record a rock art site, or employ consultants who specialize in recording rock art sites. Second, it has opened a dialogue between American Indians and the archaeological community. This latter outcome has been good for the entire rock art community. 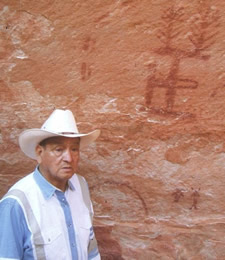 Mr. Bull Tail offered details about the arrangement of the panel which presented archaeologists with a completely different explanation for the paintings